I loved the Hunger Games and Divergent movies and books, but there’s so much more to the dystopian genre! Fellow librarian Sarah Burkard has already covered some of the great dystopian fiction books that we have in the collection, but there are some awesome movies that also fall under the auspices of dystopia! The next time you’re in the mood to watch people battle the odds against an oppressive government, try out some of these movies! You won’t be disappointed! 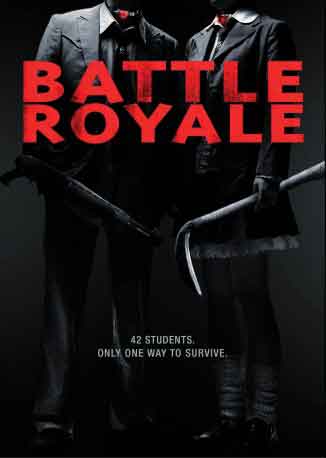 In this Japanese film, the collapse of the government led to a spike in unemployment and juvenile crime. When order is reinstated, those in authority seek to stop crime from happening by randomly selecting one ninth grade class each year to be sent to a remote island, outfitted with exploding neck collars, and ordered to battle each other to the death until one survivor remains. The main character, Shuya Nanahara, seeks to end this practice by attempting to get off the island with his best friend and the girl he has a crush on, but along the way they have to face the fact that their classmates are a lot more brutal than they could ever have imagined.

While the concept on paper seems very similar to the Hunger Games, the actual execution is very different. Katniss and Peeta did not know the other participants in the Hunger Games, but the students forced to kill each other in Battle Royale have been classmates for years, which changes the way the fight is viewed. 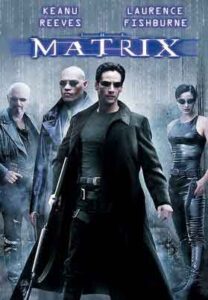 Widely considered a classic of the dystopian and science fiction genres, The Matrix follows Neo, a seemingly ordinary person who discovers that the world is not what it seems. In fact, it is an elaborate deception spun by artificially intelligent machines determined to keep humanity complacent and controllable. When Neo chooses to “see how deep the rabbit hole goes,” he is confronted with danger and mayhem as he attempts to free humankind from the clutches of the machines, while the rest of the world sleeps complacently in the perception that everything is fine.

The Matrix won four Academy Awards, and features Keanu Reeves as Neo, the Chosen One. It is a fast-paced and fun movie that features pretty great visual effects (including slow-motion avoidance of bullets) and great fight scenes. 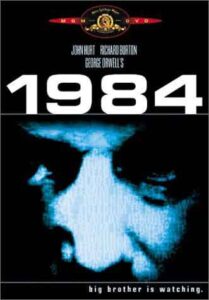 Based on the book by the same title by George Orwell, 1984 stars John Hurt as Winston Smith as he attempts becomes an individual in the face of the totalitarian surveillance and propaganda enforced by Big Brother. Winston must navigate the murky waters of an illicit affair with a fellow governmental employee while trying to avoid the many cameras and spies of the Party. Winston’s attempts to become an independent person in the face of a massive nation-wide collective existence lead to him suffering greatly and he must fight to keep himself apart from others, especially in the face of Big Brother’s attempts to control his thoughts and crush his newly minted independence back into the group-thought majority.

The movie 1984 does a phenomenal job of bringing the classic book to life and introducing viewers to the dangers of too much government interference with the everyday individual. 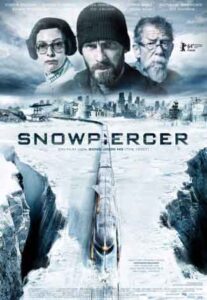 Snowpiercer was one of my favorite movies of 2014. It is based on a French graphic novel called Le Transperceneige by Jacques Lob and Jean-Marc Rochette and was adapted into a film by Korean director Bong Joon Ho. In Snowpiercer, an attempt to counteract global warming by releasing a chemical into the atmosphere goes horrifically wrong, leading to global cooling of such intensity that all life on the Earth dies. The one exception to this rule is contained aboard the Snowpiercer, a high-speed train that was designed to travel around the world and can withstand the temperature changes. Onboard the Snowpiercer, there exists a dichotomy of worlds – the paying passengers and those who managed to jump on while those around them were dying. Curtis (played by Chris Evans) is one of the latter, and he is determined to make it from the back of the train to the front to change the status quo.

While this is an amazing movie, I feel it is necessary to put a warning label on it:  it is very weird. But it is also peppered with an amazing all-star cast, including Tilda Swinton, Jamie Bell, Ed Harris, John Hurt, Octavia Spenser, and more, and it is like nothing else I saw this year! 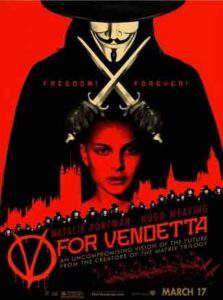 This movie, based on the graphic novel by the same name by Alan Moore, follows Evey (Natalie Portman) as she encounters and befriends a mysterious, Guy Fawkes masked, freedom-fighter, V (Hugo Weaving), whose disfigurement at the hands of governmental authorities awakened in him a wish to bring vengeance down upon those that caused his pain. Throughout the film, V strives to bring about social change in order to topple the authoritarian government that exists in this alternate-England, while Evey is forced to examine her own complacency and must decide whether she thinks what V is fighting for is worth it. V for Vendetta was a seminal movie of my youth and made me aware of the political change that can be effected when one person stands up and says no.

And guess what? John Hurt is in this one too! He’s certainly a master of the dystopian genre.

Dystopia as a genre is on the rise in our movie-making culture, and the many variations on the theme of “ordinary people fighting to overcome extraordinary odds in the face of massive (often governmental) obstacles” always makes for an interesting and thought-provoking movie night.

Honorable mentions (we have a lot of dystopian films in our collection!)