Ten-year-old Ha’s life is about to drastically change. She is living in Saigon in 1975 during the Vietnam War and it is no longer safe. She lives with her mother and her three older brothers.  Her father was captured and has been missing for the past nine years. With the help of her father’s best friend, Ha and her family flee Saigon on a Navy ship. They travel to Guam and then to a tent city in Florida where they must remain until an American will sponsor them. After months of waiting, their sponsor brings them to Alabama where they face culture shock, prejudice, language barriers and eventual acceptance.

Inside Out & Back Again, based on the author Thanhhà Lại’s own life, is a novel in verse and is told in the first person narrative from Ha’s perspective. It follows her journey for one year and is written like a diary. Each entry is a separate poem that together shares her story. These poems speak of hardships, supportive brothers whom protect her, and the strength she draws from her 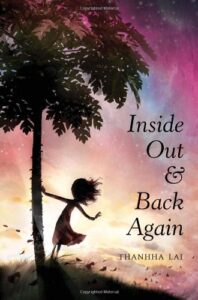 mother. Ha is bright, mischievous and strong-willed. Her reflections are insightful and often funny. She writes it “would be simpler if English and life were logical” and “whoever invented English should have learned to spell.” It is a realistic look at what it is like to be an immigrant and the frustrations of learning both a new language and new culture.

Ha works hard to learn English and her quest for understanding sometimes comes at a cost. She starts to realize she is being teased. She reflects “I understand and wish I could go back to not understanding.”

This novel is an honest look at the struggles many face when coming to a new country. Through Lại’s sparse and succinct writing, the reader can feel the embarrassment, anger and eventual triumphs that Ha faces as an immigrant. Any child who has been bullied for being different or has moved to a new school will relate to her experience.

This book is available right now through the Deerfield Public Library – you can put it on hold through our online catalog. If you find that you have to wait, check out “You Might Also Like …” at the bottom of the catalog page.