Described as “The Social Network meets The Wolf of Wall Street”,  Michelle Miller’s debut novel The Underwriting, sounded like the perfect summer read. I really have no understanding of how things work on Wall Street, so I thought I might gain a little insight while enjoying a juicy read. I still understand little of Wall Street, but I did get a good page-turner. 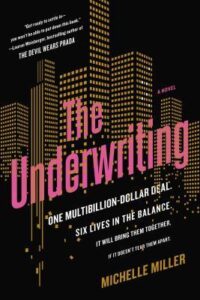 Hook, a popular dating app (think Tinder) created by awkward tech genius Josh Hart (think Mark Zuckerberg), is ready to go public. Hart taps Todd Kent, a young hotshot on Wall Street, to lead the IPO. Hart demands the IPO take place in less than two months, forcing Todd and his team to work all hours of the day and night to prepare. From dealing with Hook’s egomaniacal CFO to securing potential investors, the team has their work cut out for them. But when a college student’s death is tied to the use of the Hook app, the IPO’s success is threatened. Todd must move quickly to do damage control in order to save the deal.

You might not think that a story about an IPO would be so exciting, but it was. The fast-paced, alcohol and sex-fueled lifestyles of the Wall Street crowd are scintillating. Most of the characters from Wall Street and Silicon Valley are unlikeable, but nevertheless, I kept hanging on, waiting to see if everything and everyone was going to come crashing down in the end. This quick, suspenseful read is a perfect choice for a good vacation read.

You can place a hold on the book in the Deerfield Public Library catalog right now. If you have to wait, be sure to check out “You Might Also Like These…” at the bottom of the catalog page.