If you are unfamiliar with the Swedish author Fredrik Backman, I highly recommend him. His first novel, “A Man Called Ove,” debuted in Sweden in 2012 (released in the U.S. in 2014) and is a wonderful read. His second novel, “My Grandmother Asked Me To Tell You She’s Sorry,” was released in Sweden in 2013 and this year in the United States. And like his first novel, it is an absolute delight to be savored.

Seven-year-old Elsa is “different.” At school she is picked on and has no friends. Her best friend is her grandmother, who creates stories of a wildly imaginative land of make believe that they escape to each night. But when her grandmother dies of cancer, Elsa is left alone. At night, Elsa sneaks into her grandmother’s wardrobe to sleep, losing herself in her grandmother’s stories. 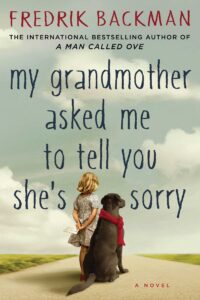 This sweet, touching story is at times humorous and at times full of grief. I enjoyed meeting the various characters and hearing their own stories, even if they didn’t seem too likable at first. The richly drawn fairy tales and Elsa’s imaginative, feisty spirit are a real joy to read. Elsa is one of those characters who you just fall in love with, who you want to protect, and who you never want to say goodbye to. I found myself sad at the end because I didn’t want to leave Elsa, or any of these characters. It’s rare that I find characters like this, and when I do, it’s such a pleasure to get lost in their story. Hopefully there will be much more to come from this wonderful writer.

You can place a hold on the book in our catalog right now. If you have to wait, be sure to check out “You Might Also Like These…” at the bottom of the book’s catalog page.