You spend an entire year sifting through hundreds of children’s books, send nominations and suggestions to your fellow committee members, discuss the committee’s nominations and suggestions for two long days, vote again and again until the process is finally complete and you have a clear winner. And then, you bask in the excitement when your chosen winner(s) are finally announced to the world. For Youth Librarian Jenna Friebel (Ms. Jenna), being a part of this process as one of the seven members on the 2016 Geisel Award Committee was a very fun and fulfilling experience. 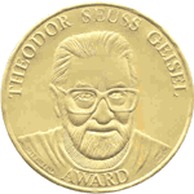 The Geisel Award, named for world-renowned children’s author Theodor Geisel, a.k.a. Dr. Seuss, is one of several awards given out at the American Library Association’s (ALA) annual Youth Media Awards. The Geisel Award is given annually to the author(s) and illustrator(s) of the most distinguished American book for beginning readers published in English in the United States during the preceding year. Administered through the Association for Library Service to Children (ALSC), a division of the ALA, the Geisel was first awarded in 2006.

We were very excited to have our very own Ms. Jenna serving on the Geisel Award Committee and asked her to tell us a little bit more about her experience.

Deerfield Public Library (DPL): What an honor to be selected for the Geisel Award Committee! Tell us a little bit about the application and selection process.

Jenna: ALSC has an application for all their committees and the association president appoints who will serve. After filling out my application stating my interest in a range of committees, it was nearly a year before I got the offer to serve on the Geisel Award Committee. Even though the award is solely for books from one calendar year, the term is a two-year appointment (July 2014- June 2016).

I can’t say for sure why they selected me, but I think it is due in large part to my participation in the 2014 ALSC Bill Morris Book Evaluation Seminar. This is a one day seminar that happens bi-annually at the ALA Midwinter Conference. It is for ALSC members who wish to be trained in book evaluation techniques and learn more about the ALSC book awards. I had to apply and be selected. Out of the seven of us appointed to the 2016 Geisel Award Committee, five participated in this seminar together.

DPL: As a youth librarian, has this always been one of your goals, to be part of a youth awards selection committee?

Jenna: In 2009 when I was a college undergrad, I took a children’s literature course. My professor talked about his time serving on the Newbery committee. The Newbery is another ALSC book award that awards the best children’s book of the year and was first given in 1922. Since hearing about his experience and learning about the book awards, it became my dream to serve on one of the ALSC book award committees.

DPL: Where does the list of initial books in the running for the award come from?

DPL: Committee members are selected so far in advance. When did the 2016 committee initially start communicating about choosing a book for the award?

Jenna: I was appointed in the summer of 2014, and the committee started communicating by email that fall. We met in-person for the first time at the ALA Midwinter Conference in January 2015 in Chicago (when we had that massive snowstorm!). The books started arriving shortly after, and that is when the real work began!

DPL: With the committee being all over the country, how did everyone communicate?

Jenna: We communicated regularly by email throughout the year. Additionally, after our initial in-person meeting, we met at the next two ALA conferences to discuss the books: ALA Annual Conference in summer 2015 in San Francisco and ALA Midwinter Conference in January 2016 in Boston where our final decisions were made!

DPL: Did you feel a lot of pressure in choosing the award winner?

Jenna: Not really. I knew what I was doing was important, and I did have to put a lot of time into my evaluations, but in the end I always remembered that there’s a specific criteria for consideration and that I am one in a group of other dedicated and passionate librarians. There is a firm process that is followed to select a winner and committee members are constantly reminded to trust the process.

DPL: Now that it’s over, what was the most memorable part of the experience for you?

Jenna: The experience as a whole was incredible. It’s hard to pinpoint one aspect that was the most memorable, but it was truly amazing to work alongside such awesome people and build connections with other passionate librarians. My fellow committee members are inspiring and fun, and I feel so lucky to have gained their friendships because of this process. I can’t wait to see them again this summer at yet another ALA conference – this time in Orlando – where we will have the award ceremony for our winning authors and illustrators!