Since I was a kid I’ve always loved watching the game of football.  Like millions of Americans, I watched the Super Bowl this past Sunday. But I watched it with a different perspective, all because I had read “League of Denial: The NFL, Concussions, and the Battle for Truth” by Mark Fainaru-Wada and Steve Fainaru. Now when I watch football, I can’t help but think of some of the long-term health implications for the players. 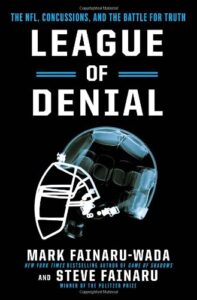 “League of Denial” is the story of a small group of doctors taking on the NFL over the issue of concussions. One part of the story was recently made into the film, “Concussion”.  Bennet Omalu was the Nigerian-born neuropathologist who discovered what is now known as CTE, or chronic traumatic encephalopathy. How he discovered the disease is a fascinating part of this book, but it is only a small part of the story.

What this book is really about is what the author’s claim was a deliberate program by the NFL to discredit the scientists who were doing the research on CTE. According to the authors, the NFL, when faced with medical evidence of the CTE issue, reacted in much the same way that the cigarette industry reacted to the news of lung cancer in the 1960s. The NFL created their own “scientific” studies that were done by doctors paid by the NFL and thus had a conflict of interest. The NFL consistently downplayed the scientific evidence while at the same time promoted that they cared about player safety and were doing all they could to improve the game. Meanwhile, Omalu and other doctors were discovering more and more about CTE and how widespread it appeared to be in former players.

If you love the game of football, you’ll find this book absolutely fascinating. Unfortunately, you’ll probably never be able to watch the game in the same way again.

You can put “League of Denial” on hold in our catalog right now. If you have to wait, be sure to check out “You Might Also Like These…” at the bottom of the book’s catalog page.