It has been a rough year so far for music, as we’ve lost a number of stars. Merle Haggard was a legend in country music, Prince will never be forgotten, and we were all shocked at the sudden passing of David Bowie. “Blackstar” was released on David Bowie’s 69th birthday in January, and two days later he passed away. “Blackstar” was a critical and commercial success and Bowie had his first ever #1 album on the U.S. Billboard charts. “Blackstar” also sounded like an album by an artist who knew he wasn’t long for the world. The song “Lazarus,” in particular, sounds like it was recorded from beyond the grave. 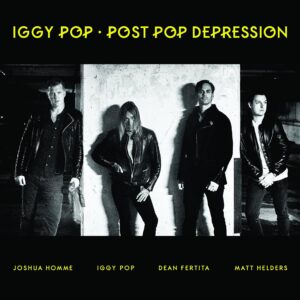 One of Bowie’s best friends and collaborators was Iggy Pop. Iggy was an integral part of Bowie’s time in Berlin in the late 1970s. They wrote songs together, recorded together, and went on tour together. Many critics consider the “Berlin” period of both Iggy Pop and David Bowie to be the artistic peak of their careers. In March 2016, Iggy Pop released the album “Post Pop Depression.”  After listening to it several times it seems clear that this album is Iggy’s love letter to David Bowie and their time together in Berlin.

“Post Pop Depression” is one of the best Iggy Pop records in years. Although it was primarily recorded in California, it has a very similar sound to the albums he recorded in Berlin. It very much sounds like it could have been the next album Iggy recorded after “Lust For Life.” It was recorded right after David Bowie passed away but it seems like his spirit is all over the record. If you’re a fan of David Bowie and Iggy Pop and their Berlin albums you’ll love “Post Pop Depression” as well.

A number of albums by Iggy Pop and David Bowie are available to put on hold through our catalog.  Many titles are available both on CD and streaming through Hoopla. One catalog search will provide availability for both options.