You might recognize Herman Koch’s name from his bestselling 2012 novel The Dinner. A Dutch writer, Koch is a master at creating unnerving literary thrillers. Dear Mr. M is Koch’s third novel to be translated into English, and like The Dinner, and his last novel, Summer House with Swimming Pool, it is another deliciously creepy story that will keep readers guessing right until the very end. If you’re looking for fast-paced suspense and a quick read, this is not your book. Although he writes thrillers, Koch’s stories take their time; slowly unfolding with an ominous undertone and sense of uncertainty that will keep readers turning the pages. Some people may read “slowly unfolding” as boring, but this story is anything but boring. 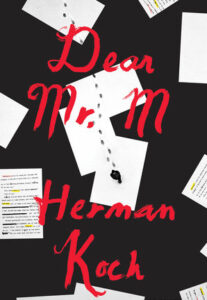 M, an aging writer whose career is in decline, is the obsession of his downstairs neighbor, who M continually fails to recognize. The neighbor watches him, looks at his mail, and even follows his much younger wife, saying “Yes, I have certain plans for you, Mr. M. You may think you’re alone, but as of today I’m here too.” Who is this mysterious unnamed neighbor and what is his agenda?

M rose to fame when he wrote a fictionalized story based on the real-life disappearance of a history teacher, Jan Landzaat, who went missing after having an affair with his student Laura. Last seen at a remote cabin where Laura was staying with her new boyfriend Herman, Jan is believed to have been murdered. Laura and Herman are the primary suspects, but without a body or any evidence, they are never charged.

The story flashes back to Laura and Herman and we learn about Laura’s brief affair with Jan, how she and Herman became a couple, and Jan’s continuing obsession with Laura. We hear about the events leading up to Jan’s disappearance (or the story they told everyone). But is that what really happened? What really happened to Jan? How does M’s fictional version of events differ from the truth? And how is the mysterious neighbor connected to all of this? All of these questions will be answered, but in a very unexpected way. Readers who enjoyed The Dinner, or who enjoy compelling psychological suspense, will not be disappointed.

You can put Dear Mr. M on hold in our catalog right now. While you’re waiting, be sure to check out “You Might Also Like These …” at the bottom of the book’s page for more reading suggestions!