When I first looked at John Donvan and Caren Zucker’s “In a Different Key: The Story of Autism,” I felt a little intimidated by its 670 pages. But once I started flipping through it, I wanted to read every word. The authors have taken a massive topic – the social and scientific history of autism – and molded it into a gripping narrative. This is an important book for anyone who wants to contribute to a more compassionate world.

The book begins in the late 1930s, shortly before Dr. Leo Kanner published the first scholarly paper on autism in the United States. Sadly, as I would learn, the history of autism has been plagued with ignorance and bad ideas. Psychologists of the mid-20th century blamed autism on emotionally cold “refrigerator mothers.” Schools dismissed autistic children as uneducable, leaving the children with nowhere to go but awful state-run institutions. Autistic individuals were used in strange experiments of dubious value; the authors describe one researcher who put LSD in a boy’s chocolate milk. 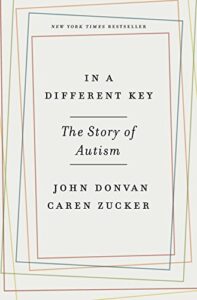 But despite many depressing and shocking stories, “In a Different Key” features uplifting moments, as well. Donvan and Zucker highlight the tenacious parents who fought for their children’s right to be educated. We learn about the careful scientists who exposed shoddy studies in hopes of truly understanding the autistic mind. We also meet Donald Triplett, Leo Kanner’s Case 1, who is still alive in Mississippi and is treated with patience and love by everyone in his small town.

One of the most interesting parts of the book explores the neurodiversity movement. Some autistic individuals argue that they need not be cured of anything at all; they believe that autism affords them unique gifts and a valuable perspective on the world. As the authors note, the internet has been especially helpful in building a community that takes pride in their differences. That said, autism comprises a broad variety of conditions, some more disabling than others, so a large percentage of the autistic community would still welcome some sort of cure. (We see this in one particularly heated debate between an autistic anti-cure activist and the mother of a more profoundly impaired son.) Obviously, autism is a complex subject that doesn’t lend itself to generalizations.

Indeed, because autism is such a complex subject, it’s easy to see why “In a Different Key” is over 600 pages long. But don’t let the size scare you; this is a thought-provoking and highly-readable book, and something that will linger in your mind long after you have closed the cover.

You can put “In a Different Key” on hold in our catalog right now. Be sure to check out “You Might Also Like These …” at the bottom of the book’s page for more reading suggestions.