Sylvia Townsend Warner’s “Lolly Willowes” is a funny and delightful, 90-year old British novel about a spinster who becomes a witch. Why recommend this novel now? For one thing, it may be the perfect cozy book to read while savoring the end of autumn and watching the last leaves sink as you sip cider. But, charms aside (and this novel has many), it’s also a penetrating story about the damning effects of sexism and patriarchy. 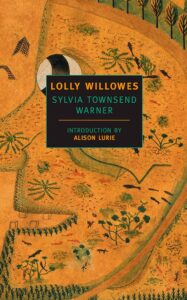 After her father’s death, Laura Willowes is expected to move in with her brother Henry’s family and help with the chores and child rearing. Warner writes:

“Even in 1902 there were some forward spirits who wondered why that Miss Willowes, who was quite well off, and not likely to marry, did not make a home for herself and take up something artistic or emancipated. Such possibilities did not occur to any of Laura’s relations. Her father being dead, they took it for granted that she should be absorbed into the household of one brother or the other. And Laura, feeling rather as if she were a piece of property forgotten in the will, was ready to be disposed of as they should think best.”

This kind of understated humor is consistently appealing, and it illuminates Laura’s initial reticence to question her situation in life. The Willowes’ world is quite charming — think “Downton Abbey” — but as the years and pages advance, the routines and limitations make Laura feel increasingly claustrophobic. Despite her intense curiosity and wide reading in philosophy, botany, and other subjects, she is still stuck being “Lolly,” the nickname the family calls their dependable, beloved aunt. Eventually, she just can’t take it anymore.

I don’t want to reveal any of the novel’s genuine surprises, but suffice it to say that as Laura becomes more self-assured she begins to believe she is a student of the ‘dark arts.’ In the final twists and turns of the plot, we are left pondering along with Laura, “what else can there be but witchcraft” for women in a world that fears and denies their power? Deals with the devil always have costs, but this novel makes the shocking and necessary suggestion that a woman’s power is worth the highest price — even damnation.

“Lolly Willowes” is the kind of “lost classic” that is perennially revived. It boasts the recommendation of writers like John Updike and William Maxwell and more recent authors like Helen MacDonald (“H is for Hawk”) and filmmaker and actress Greta Gerwig. The novel was a bestseller when it was published in 1926, appealing to a post-World War I generation of single and independent women. Today, the novel’s themes are sure to take on new significance and urgency.

You can put “Lolly Willowes” on hold in our catalog, or check out the eBook on Hoopla. Be sure to check out “You Also Might Like These…” at the bottom of the book’s page for more reading suggestions.