One of my favorite historical periods to learn about and experience vicariously through historical novels is the Danish invasion of England during the late 800s and early 900s AD. There’s something about the Danes and the Vikings that calls to me, and Bernard Cornwell’s “The Last Kingdom”, the first in his “Saxon Stories” series, is a masterpiece. Uhtred of Bebbanburg, the hero of the epic saga, is the son of a Saxon lord. He is captured by Danes and raised by them. He eventually makes his way to Wessex, the eponymous ‘Last Kingdom’ of the title, and ends up in the service of Alfred the Great. Uhtred is constantly torn between his loyalty to other Saxons and his love of the invading Danes, and he is haunted by the thought of Bebbanburg, which was stolen from him by his uncle. 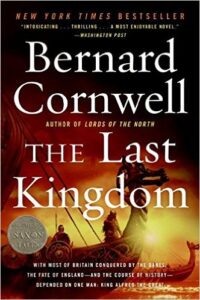 Cornwell does a magnificent job of putting together the atmosphere and brutality of the world of Alfred the Great and Wessex, and one of his particular strengths is in his depiction of the battles that were fought to bring forth a unified England. Cornwell is consistently lauded by other authors, including George R.R. Martin who authored “A Game of Thrones”, for his ability to write engrossing battle scenes. “The Last Kingdom” is thoroughly captivating and is a must for anyone interested in historical fiction and Vikings in particular.

You can put “The Last Kingdom” on hold through our catalog. While you wait, be sure to check out the suggestions for other reads in the “You Might Also Like These …” section of the catalog.

For fans of: “The Paris Architect” by Charles Belfour, the TV show “Vikings” on the History Channel, and author George R.R. Martin.