The animal kingdom contains many fascinating stories, and one of the best appears in William Stolzenburg’s “Heart of a Lion”. Stolzenburg follows the odyssey of a male mountain lion (aka cougar, puma, or panther) who walked halfway across the continent before being killed by an SUV in Connecticut in 2011. This is a sad story, but also a compelling biological detective tale, and I recommend it to anyone who appreciates the natural world. 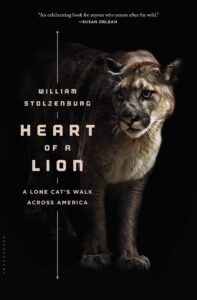 Stolzenburg begins by exploring the history of mountain lions in the United States. The species once lived from coast to coast, but deemed a threat to humans and livestock, the cats were almost entirely eradicated east of the Mississippi by the early 1900s. As we see, that wasn’t the end of the species’ troubles: even today, states like South Dakota are aggressively killing mountain lions in the name of public safety. The Connecticut lion’s genetic profile indicated that he was most likely born in South Dakota, but he seems to have fled that danger zone and headed east.

“Heart of a Lion” retraces the cat’s probable path between South Dakota and Connecticut. As Stolzenburg explains, the lion left hair, urine, and scat at several points along the way, allowing wildlife officials to collect DNA samples. The first such evidence was discovered in Minnesota; later evidence came from Wisconsin and New York. After the cat died in Connecticut, scientists compared the DNA samples from different locations, and determined that everything matched the same cat. Stolzenburg uses eyewitness accounts to flesh out the details of the Connecticut lion’s trek, though some parts of the story remain a mystery. For example, the cat must have crossed several major bodies of water; how did he do that? Stolzenburg offers some ideas, but we’ll never know for sure.

The book becomes especially moving when you realize that the cat was on a quixotic quest for a mate. Wild mountain lions hadn’t lived in Connecticut for decades, so the cat was never going to find what he was looking for. Still, you have to admire his courage and perseverance. “Heart of a Lion” also makes me ponder all the amazing animal feats we will simply never know about. Now, I can’t look at a wild animal without wondering if that creature is in the middle of its own epic journey.

You can put “Heart of a Lion” on hold through our catalog right now, and be sure to browse the shelves for more great books about nature!