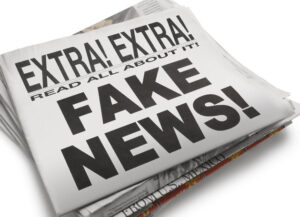 We live in a unique era of news consumption. Long gone are the days of relying on the evening news or the morning paper as the primary source of information. We are subject to a non-stop stream of information through 24-hour news channels, social media, emails, and text messages. Links are shared across various channels without much attention paid to the source or the publisher, resulting in the spread of misinformation, a phenomenon dubbed “fake news”.

The concept of “fake news” isn’t entirely new. Tabloid journalism has been around for the better part of the past century featuring sensationalized stories in publications such as The National Enquirer, National Examiner, and The Globe. There are a plethora of satirical newspapers too, The Onion, founded in 1988, being the most notable. Stories written for these publications rarely, if ever, had real-world consequences.  However, the term “fake news” gained traction during the 2016 election cycle. Stories with elements of “truthiness” and sensationalized headlines were shared and spread via social media networks. This resulted in large quantities of people being exposed to, what Gilad Lotan, BuzzFeed’s head of data science, refers to as “not-fake-but-not-completely-true information”.

In the wake of the fake news phenomenon, libraries have taken the opportunity to promote and stress the importance of information literacy. Librarians are trained to show people how to find facts and seek out thoroughly vetted, accurate information. This has been our job long before fake news entered the picture, and now it is more relevant than ever. Is it up to libraries to save us from fake news? While it is certainly not our job to tell people what sources they should get their news from, it is our job to provide the public with the necessary tools to evaluate and examine sources for accuracy. On Thursday, June 22nd at 6 p.m., the Deerfield Public Library will be presenting “The Real Story Behind Fake News”, a panel discussion featuring librarians and veteran reporters on how news gets made, as well as tools to spot fake news. Please register ahead.

We also encourage patrons to check out the following resources  to help identify fake news: