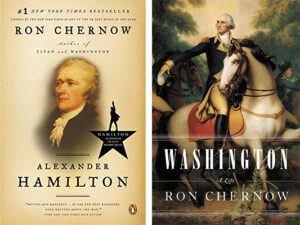 Lin-Manuel Miranda read “Alexander Hamilton” by Ron Chernow on a beach in Puerto Rico and was inspired to create the musical, “Hamilton”. The story of Alexander Hamilton is an amazing one. He was born poor in the Caribbean, immigrated to New York City just before the Revolution broke out, and ended up becoming Washington’s senior aide.

Hamilton was a self-made man who rose to the top because of his intelligence and hard work. He ended up becoming one of the Founding Fathers of our nation and was instrumental in writing the Constitution, and developing the three branches of government and all of its checks and balances. He also was involved in several scandals, had a famous feud with Thomas Jefferson, and ended up losing his life in a duel with Aaron Burr. His life was interesting enough that it made for a great musical.

“Washington: A Life”, also written by Ron Chernow, is just as well-written and fascinating as “Alexander Hamilton”.  It tells the life story of our first president George Washington. This isn’t a book built on the myths of Washington, such as the cherry tree, but based on fact. However, Washington still comes across as larger than life and a real American legend. For instance, the book talks about a younger Colonel George Washington who served for the British forces in the French and Indian Wars in the 1750s. He would often ride on his horse to the front of the lines. Bullets would be flying around him but he was always fearless and no bullets ever hit him. The native Indians believed he had a spirit shield because he seemed impervious in battle. When you read Chernow’s book you realize just how important a man Washington was to the founding of our nation. He truly is the father of our country.

What is interesting about both books is they both cover in great detail the philosophical ideas that were in conflict at the dawn of our country. The Federalists, led by Hamilton and Washington, believed in a strong federal government and central institutions. The Republicans, led by Thomas Jefferson, believed more in the rights of states. It’s amazing that over 200 years later we still have these basic conflicts in our country. Hamilton and Washington were both amazing men, and both of Chernow’s books are well worth reading.

You can put “Alexander Hamilton” and “Washington: A Life” on hold through our catalog.