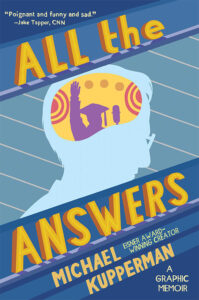 Long before Jeopardy!, there was Quiz Kids, a trivia program for children that debuted on the radio in the 1940s. One of its stars was Chicago’s Joel Kupperman, who became a regular contestant at age six and charmed listeners with his precocious math skills. He received thousands of fan letters every week and bantered with comedians like Jack Benny and Bob Hope.

Joel remained with Quiz Kids well into his teens, when the show had moved into television. But as an adult, his celebrity days clearly haunted him; he rarely spoke about Quiz Kids and avoided reunions with fellow participants. In recent years, as Joel began suffering from dementia, his son, cartoonist Michael Kupperman, rushed to learn more about Quiz Kids while he still could. The result is the mesmerizing graphic memoir All the Answers.

Much of Michael Kupperman’s art in All the Answers is inspired by the ephemera he found in his father’s childhood scrapbooks: newspaper clippings, advertisements, publicity photos, and so forth, depicting Joel and the other Quiz Kids. The illustrations give life to an interesting era in entertainment, which bridged World War II with the 1950s, and the golden age of radio with the birth of TV. This is a pop culture landscape that is largely unknown to younger generations – you won’t find Quiz Kids on MeTV – so I was fascinated by all of it.

That said, All the Answers is far more than a history lesson. It’s the story of a son desperately trying to understand his father, and as such, it’s one of the most powerful books I’ve read this year. While researching Quiz Kids, Michael begins to recognize the enormous pressures that molded his father’s development as a child. Joel thought that his public persona was “manufactured,” and he tells his son, “I felt that I was trapped in a role that would make the kind of people I would really like to know…not interested in spending time with me.” Michael’s journey does not end in a neat, happy ending; there is no magical moment of catharsis for anyone involved. But the book does offer some profound truths about life, and I know I will be thinking about this story for a long time.

All the Answers is part of our adult graphic novel collection, and if you’d like to add it to your reading list, you can put it on hold through our online catalog right now.