Some photographers will do anything for a great shot. Ask Paul Souders. Over four summers from 2012 to 2015, Souders explored the Hudson Bay region of Canada, hoping to take the perfect picture of a polar bear. He traversed the area by himself in a small C-Dory fishing boat and an inflatable dinghy. Despite dangerous weather, troublesome pack ice, and risky encounters with the bears themselves, Souders persevered, and he shares his stories in the entertaining memoir Arctic Solitaire. 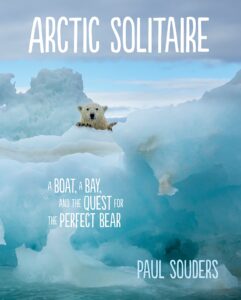 If you’re looking for suspense and adventure, you’ll find plenty of that in Arctic Solitaire. Literally every few pages, there’s a new complication for Souders to overcome. At one point, Souders gets trapped near the Arctic Circle as pieces of ice converge and block his C-Dory’s path. Later, he floats so close to a polar bear that the animal sinks his teeth into Souders’ dinghy. Waves and winds batter Souders’ boats, requiring some MacGyver-esque improvisations to avert calamity.

But there’s more to the book than a bunch of tense disaster scenes. Souders is a witty writer and provides a lot of laughs with his self-deprecating tone and appreciation for the absurd. He also has a whimsical way of describing animal behavior. For example, I love the way he recalls a polar bear who peeked into his C-Dory’s window: “Practically pressing her nose against the glass, the bear looked almost comical, like she’d just dropped by to borrow a cup of sugar.”

Of course, since this is a photographer’s memoir, the book is packed with great photographs! Souders returned from the northern waters with many beautiful and unusual images, depicting polar bears, other wildlife, and the lonely Hudson Bay vistas. One of my favorite pictures shows the inside of a polar bear’s toothy mouth as he chomps on one of Souders’ cameras. (I’m shocked the device wasn’t destroyed.) If you don’t plan to read the text, at least flip through the book for the images!

You can put Arctic Solitaire on hold through our online catalog right now. I also recommend Souders’ website, Worldfoto, which highlights his incredible range of photography from every continent.