Out fast from that first city
this boy born under the sign of the swan
runs due north along a line of spoonwoods.

and I the voice mumble magnolia
into no that air no

bowl with no horizontals,
husk: lean back. What’s two soft
hands emptying from its clay lip.

And I will be the painter chosen
to adorn the bottom of the cup:

my work invisible so long as
the cup is full.

Copyright © Julian Gewirtz, 2014. A version of this poem was originally published in Conjunctions. 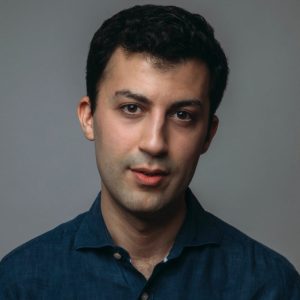 Julian Gewirtz is the author of YOUR FACE MY FLAG (Copper Canyon Press, forthcoming October 2022). His poems have appeared in the Best American Poetry, Boston Review, Lambda Literary, The Nation, The New Republic, PEN America, Ploughshares, The Yale Review, and elsewhere. He is also the author of two books on the history of modern China, Never Turn Back: China and the Forbidden History of the 1980s and Unlikely Partners (“a gripping read” –The Economist). He co-edited an issue of Logic Magazine on China and technology and has written essays and reviews for publications including the New York Times, The Guardian, Harper’s, Foreign Affairs, Prac Crit, and Parnassus: Poetry in Review.