The Need for Repetition

How have I made it this long without smoking?
I duck in to a corner store, brief refuge from the cold,

emerge with a pack of Newports in my coat pocket.
At home, I watch two straight men on the screen

having sex for money. The director’s notes say
Josh is learning to like it. I stop the film, study the arch

in his back, the look on his face containing
both pleasure and pain. I understand, Josh. How often

every one of us returns to that which hurts us and feeds us
all at once. How could we fight that desire, or even want to?

When Alec left me, I played recordings of his orchestras
in my living room, listening for the little parts where the oboe

mimics birdsong. And when he called to apologize,
I found his bed was just as warm, knowing it would all

one from the pack and smoke it down to the filter,
cough out the char. Oh Josh, all those years

I was a man before I would allow myself to seek out
that little faggot who lived inside of me. And to love him. 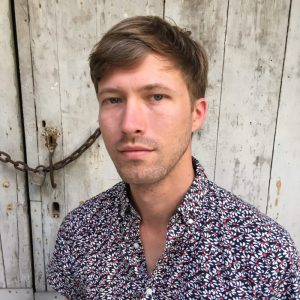 Jim Whiteside is the author of a chapbook, Writing Your Name on the Glass (Bull City Press, 2019) and is a former Wallace Stegner Fellow at Stanford University. His poems have appeared in The New York Times, POETRY, Ploughshares, Boston Review, and Best New Poets 2020. The recipient of scholarships from the Bread Loaf Writers’ Conference and Sewanee Writers’ Conference, he earned his MFA from The University of North Carolina at Greensboro. He works as a copywriter and lives in Brooklyn, New York.