Girls, never ask your gay best friend when they’re getting married. Never call your gay best friend your gay best friend. Boys and girls, never ask your gay friends who is the woman and who is the man? Because that’s the whole point, we may act like a lady but we don’t care for the lady parts. Boys, if you mean to ask who is the bottom and who is the top? I hope you know that asking this demonstrates interest in being one of the two. One of the two. Boys and girls. Listen to me, still breaking up with old black and white habits. When you mail your acceptance, please check if you prefer the beef or fish. In English, beef can also mean to have a problem with. In Spanish, a fish has been called el que por la boca muere. When I have a problem I spit it out. Chicken isn’t a menu option. My mouth has gotten my teeth knocked out before–can you guess which? Don’t assume I will get married. But love is love. My tongue is in my cheek again, because where else would it be? Love is love, you say, as if the heart were a palindrome. Friends, don’t pretend orientation doesn’t matter. Or do these two sound the same to you: This cake is to die for. // Is this the cake I died for? No, I don’t care if a calla lily isn’t a true lily. I would still include it in my bouquet; I would stick it in your centerpiece anyway. You want to know why I haven’t gotten married? There aren’t enough kinds of lilies: tiger, calla, Easter, Asiatic, of the valley. Or maybe I don’t think a Mary should get married, anchored to the past. Or maybe because my partner can officiate a wedding for his friends in 50 states, but a baker can still refuse to make our cake. It’s an old habit I still can’t break. Thinking about getting gay married to my gay best friend, praying to my gay God, having dinner with my gay family, using my gay hand to spoon gay cake into my cake mouth. There aren’t enough words for being gay: fairy, pansy, sissy, and even cake. But also: confirmed bachelor, friend of Dorothy, family. Why do you smash cake into your spouse’s face on your wedding day? You don’t have to answer. Because my tongue is in my cheek again. Where else could it go? I’m asking for a friend. 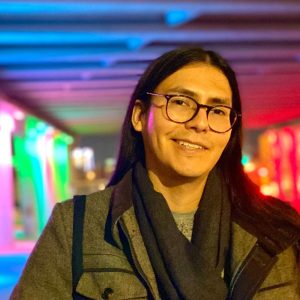 Benjamin Garcia’s first collection, THROWN IN THE THROAT, won the National Poetry Series and the Eugene Paul Nassar Poetry Prize, in addition to being a finalist for the Kate Tufts Discovery Award. He works as a sexual health and harm reduction educator in New York’s Finger Lakes region, where he received the Jill Gonzalez Health Educator Award recognizing contributions to HIV treatment and prevention. A CantoMundo and Lambda Literary fellow, he serves as core faculty at Alma College’s low-residency MFA program. His poems and essays have recently appeared or are forthcoming in: AGNI, American Poetry Review, Kenyon Review, and New England Review. His video poem “Ode to the Peacok” is available for viewing at the Broad Museum’s website as part of El Poder de la Poesia: Latinx Voices in Response to HIV/AIDS.