by Megan Fernandes
By accident, I carried around a sweet potato
in my purse for a week. Scurrying for my wallet,
I would toss the hairy rock, pink and bulbous,
a little alien that my cat would pounce on
when it rolled out onto the wooden floor,
before I scooped it, too quickly, back into its
satchel. Cat thought, perhaps, that it was some shelled
sea animal, embryonic and elbowish,
concentrated like a bullet, big enough to cradle.
I felt like Leopold Bloom, secretly caressing
the potato, saying to myself, “Ah, there it is…. po-taa-to”
over and over until it became to clear that Bloom
clutched the little spud to keep
the earth close, so close that when Dublin bloomed bright
with its mass electric trees, he could think,
here is the thing that grew in the ground. At the end
of Nausicaa, there are sweet mulvey lumps, señoritas
and blood flow, breadvans and Rip Van Winkle.
This is my favorite paragraph of six hundred pages.
Half-sleep. Brain fog. The world was mapped in 1904,
it was the end of the frontier. It was the end of boy
adventure novels. It was the beginning of wires.
Here is the thing that grew in the ground.
Here is the thing growing in my purse,
here it is, here.

Copyright © 2015 by Megan Fernandes. This poem received commendation by Don Paterson in the annual Edwin Morgan International Poetry Competition and was published in Fernandes’ first collection The Kingdom and After (2015, Tightrope Books). 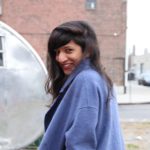 Megan Fernandes is a poet living in NYC.