Your absence is a bisected city
block where a hospital once stood.
The footprint of a yellow house on Providence’s east side
we once shared. Demolished. A white pickup you drove
decorated with black dice. The ground beneath it
crumbled—poof—then paved over, engraved like verses
into stone. When I was told what happened to you,
I sank to the wet floor of a bar’s bathroom, furious
that you left us to reassemble ourselves
from rubble. To build, between subway stops,
some saccharine monument
pigeons shit on, empty except for a circle of queens
chattering, furnishing the air like ghosts. Your death
means I’m always equidistant from you,
no matter where I travel, where I linger,
misguided, hopeful. Last night, by candle light,
a woman unearthed me.
Together, she and I grieved
the impossibility of disappearing
into one another. Poof. Since you died,
erasure obsesses me. Among the photos at the memorial,
one of a banner that reads WHERE IS YOUR RAGE?
ACT UP FIGHT BACK FIGHT AIDS, carried by five
young men. Your face in each. Your beautiful face.

Copyright © 2022 by Stefania Gomez. Originally published in Poem-a-Day on March 10, 2022, by the Academy of American Poets. 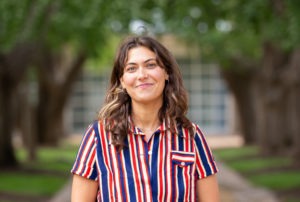 Stefania Gomez is a queer writer, teacher, and audio artist from Chicago’s South Side who received her MFA in poetry at Washington University in St. Louis in 2022. Currently teaching at the Poetry Foundation in Chicago, she has received fellowships from the Dirt Palace, Sewanee Writers Workshop, and the International Quilt Museum. Her work has appeared in the Academy of American Poets Poem-A-Day series, The Missouri Review, The Offing, and Cosmonauts Avenue.