Poor summer, it doesn’t know it’s dying.
A few days are all it has. Still, the lake
is with me, its strokes of blue-violet
and the fiery sun replacing loneliness.
I feel like an animal that has found a place.
This is my burrow, my nest, my attempt
to say, I exist. A rose can’t shut itself
and be a bud again. It’s a malady,
wanting it. On the shore, the moon sprinkles
light over everything, like a campfire,
and in the green-black night, the tall pines
hold their arms out as God held His arms
out to say that He was lonely and that
He was making Himself a man.

Copyright © 2007 by Henri Cole. Used with the permission of the author. Previously published in the poetry collection Blackbird and Wolf in 2007. 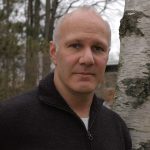 Henri Cole was born in Fukuoka, Japan, in 1956. He has published over half a dozen collections of poetry, including Touch, Pierce the Skin, and Blizzard; a memoir, Orphic Paris; and has received many awards for his work, including the Jackson Poetry Prize, the Kingsley Tufts Award, the Rome Prize, the Berlin Prize, the Lenore Marshall Poetry Prize, and the Award of Merit Medal in Poetry from the American Academy of Arts and Letters. He teaches at Claremont McKenna College. For more: henricole.com