They haven’t invented a “morning after” pill that actually gets rid of the morning after. As long as we’re talking about where I been.

Down to the E-Z Stop market to grab some buds. That’s when I ran into Hot Check Hannah, who wrote, you guessed it, a hot check

& got me some smokes. Somehow I still had five bucks when I got to the bar. I wish I’d had it when I left. I could have used five dollars.

I’m not even gonna tell you what it was like to fuck in Eddie’s trailer. Or Eddie’s friend’s trailer. [Different Eddie] [Different trailer]

God knows where he is now. Once, we were close enough to give each other lice. The future is the present we leave for others.

Besides the complications, there were bodies, the wonder of bodies, the misery of bodies. Oh, Time, you done robbed me blind.

Copyright © 2021 by D. A. Powell. Used with the permission of the author. First appeared in Iowa Reviewvol 44 issue 3 and later published in and chapbook Atlas T (2020.) 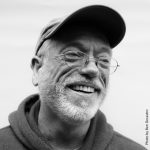 D. A. Powell is a painter and poet living in San Francisco. His books include Repast (Graywolf, 2014) and Useless Landscape, or A Guide for Boys (Graywolf, 2012). He received the 2019 John Updike Award from the American Academy of Arts & Letters. Twitter: @powell_da