The Men We Loved

The men we loved, the men we had, the men we wanted.
They pass us in the streets. They are going to the gym,
to the park, to the pub, to invisible rooms on the internet.
They cast their lines of hunger for other men now.

The men we wanted who wanted nothing to do with us.
The men we hid our names from and crept away.
They are disappearing into their work, into the rest
of their lives, picking up their phones to answer
another man’s voice and putting them down again.

The men we had now plough the ache of other men.
Time flips them over each other and abrades them
to the bone. These men who taught us to be bridges
on the way to somewhere else, something better.

The men we loved who wiped the disappointment
from our lips with a thumb, a tongue down a throat.
A promise to call again and the promise fulfilled.
Long before the accident, the illness, the overseas job,
a touch turned cold, the averted vision, the other man.

The men we loved, the men we had, the men we wanted.
They have done far worse than fail to miss us –
they have forgotten us. Each is slinking into a cab
with another guy and does not wave goodbye.

These men who once taught us of ourselves
crane to hear the call of new lives now, the call
that is always waiting to be answered, a boy crying
wolf, or maybe the truth this time. This truth

we leave our better selves for, only to find them again
when we least expect it, a face rising like a moon
in the night’s long window, a night we are scaling with
our hearts in our mouths. Then when we reach the top
of the stairs, what luck – the moon has become a mirror.

Copyright © 2012 by Cyril Wong. Used with the permission of the author. Originally published in Tilting Our Plates to Catch the Light in 2012. 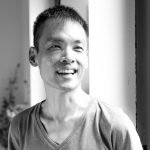 Cyril Wong has been described by The Oxford Companion to Modern Poetry in English as a confessional poet in Singapore, based mainly on “a barely submerged anxiety over the fragility of human connection and a relentless self-querying”. His most recent book is Infinity Diary, published by Seagull Books in 2020. A past recipient of the National Arts Council’s Young Artist Award and two Singapore Literature Prizes, he completed a doctoral degree in English Literature at the National University of Singapore in 2012. His poems have been translated into Bengali, Japanese, Italian, Turkish and German. His writings have also appeared in international magazines as well as anthologies by W. W. Norton and Everyman’s Library. He founded Singapore’s longest-running international poetry web journal, SOFTBLOW.