Giving the man behind the counter my money,
I take from him a fresh white towel
and walk into the sex club—the safe
one—called, mythically, Eros.
I go there, as one does, to kill an hour
or two in the hopeful dark.

Out of my clothes, I step into the dark
of the back rooms, where not money
but flesh is the currency of the hour.
I wrap my torso in the towel
and grab a condom: at Eros,
the only sex allowed is safe,

management insisting that we “Play safe
or be thrown out” into the outer dark.
Life’s much simpler inside Eros,
where for a little money
I find what I need, in my towel,
cruising the sticky floors for an hour.

But it’s been nearly an hour,
and nothing—I am not going to be safe
with just anyone! Then a man without a towel—
beautiful, in the dark—
puts a hand on my chest. He smells like money.
This is why I go to Eros.

(It’s hardly my first Eros
experience: there comes an hour
when, in spite of the money,
no matter how unsafe,
I find what I need only in the dark.)
The man without a towel

removes my towel:
I fall into the arms of Eros;
that world, an underworld, dark
no matter the hour.
And it is good. And we are safe.
It is good to have more sex than money.

Copyright © 2004 by Randall Mann. Used with the permission of Randall Mann. Originally published in Compliant in the Garden (2004.) 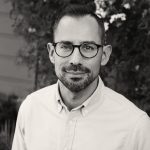 Randall Mann is the author of five collections of poetry: A Better Life, Proprietary, Straight Razor, Breakfast with Thom Gunn, and Compliant in the Garden. He is also the author of a book of criticism, The Illusion of Intimacy: On Poetry. A three-time finalist for the Lambda Literary Award, he lives in San Francisco.