Is It True All Legends Once Were Rumors

And it was as we’d been told it would be: some stumbling wingless;
others flew beheaded. But at first when we looked at them, we could
see no difference, the way it can take a while to realize about how
regretfulness is not regret. As for being frightened: though for many
animals the governing instinct, when most afraid, is to attack, what about
the tendency of songbirds, in a storm, towards silence – is that fear, too?
For mostly, yes, we were silent – tired, as well, though as much out of
boredom as for the need to stretch a bit, why not the rest on foot, we
at last decided – and dismounting, each walked with his horse close
beside him. We mapped our way north by the stars, old school, until there
were no stars, just the weather of childhood, where it’s snowing forever.

Copyright © 2020 by Carl Phillips. Used with the permission of the author. Originally published in Tin House Magazine (2017), and in the book Pale Colors in a Tall Field (2020.) 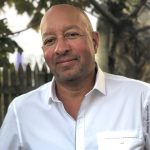 Carl Phillips is the author of 15 books of poetry. He teaches at Washington University in St. Louis. Twitter: @CPhillipsPoet Instagram: @pinestereo